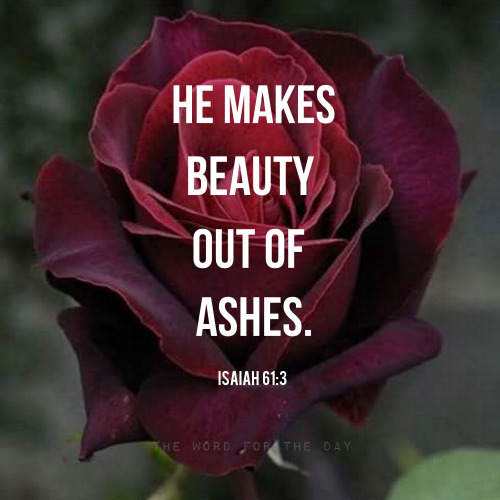 If you have said in your heart, “I have lost everything. I have nothing left in my life.” Remember, God makes beauty out of ashes. God can make all things new for you, better than before, if you just let Him. He takes your spirit of heaviness and robes you with a garment of praise. He takes your tears and mourning over what took place and gives you His precious oil of joy. Where everyone saw your end, God sees a beginning. You are a tree of righteousness. You are the planting of the Lord. You are a daughter/son of the King of kings. You will fulfill your divine purpose. You will do every work God has preordained for you to do. You will finish your course will joy. Out of your belly shall flow rivers of living water. Whatever the enemy has meant for your evil, God will turn it around for your good for His glory! Isaiah 61:3

Isn’t it beautiful that God says He can give you beauty for ashes? We love that. I think we concentrate on the beauty, but unless you give Him your ashes, you don’t get the beauty. There is a substitution plan here. There is a plan where you give Him your ashes. Then He, in return, gives you His beauty. We hold onto our ashes and wonder, Why doesn’t my life change? Where is His beauty? Well, where are your ashes? You held on to them and He couldn’t give you His beauty.

What are ashes? Ashes, I believe, are the wounded parts of our lives. Everybody has wounds; everybody has ashes–and all kinds of them. Sometimes they happen with a family member. There can just be every kind of a thing–a mate, your children, your job, your church. Ashes happen every place. Everybody gets wounded.

I think the hardest wounds to turn to the Lord are the ones you wounded yourself with when you have done stupid things.

When I first started to travel, I just started with radio, basically, and had a fifteen-minute a day weekly radio program. I had never preached in our church, never thought of it. I taught Sunday school. I had home Bible studies. I had television on Sunday mornings locally. The radio had been syndicated and had begun to grow. But I never thought of preaching in the pulpit. Neither did my husband. It was a negative; you just didn’t do that. You would understand that if you had grown up in that day. You didn’t even think of such a thing. I remember I began to have some invitations to speak in churches. That was very frightening to me.

One of my first speaking engagements was to Philadelphia, Pennsylvania, to an Assembly of God church. I was frightened. I said to the pastor, “How long should I speak?” He said, “As long as you are anointed.” He said, “When you are not, I want you to sit down. If you don’t sit down, I will tell you!” Now, I was already frightened. That just tripled it! I got up to preach, and I thought, To be anointed I had better be loud, so I was really trying to be loud. Now, remember: I had never done this before in my life and so I was SO anointed.

The Lord said something to me. He said, “If you will believe Me, there will come a day when people will come out of wheelchairs.” I didn’t just take the wound of that. I gave it to Him. I have just come back from Pakistan. We had a big crusade there about six weeks ago with 120,000 people. We turned away 20,000 from the stadium. That is unheard of. And people came out of wheelchairs. Praise the Lord!

So you blew it? So I blew it? I am having people come out of wheelchairs in America. Thank you, Jesus. We had a woman in Decatur, Illinois, who had myasthenia gravis. She had not walked in 10 years. Her bones had begun to decay and she had lost the arch in her left foot. She came to a meeting and got a new arch and walked out of the place. Hallelujah! Came out of a wheelchair.

But if you hold onto those ashes, you will never get His beauty.

Let me tell you of another incident. In 1987 or 1988, I had an opportunity to do a live satellite broadcast from Cairo, Egypt. This was unheard of. No one had ever done this, and no one has done it since.

My heart was to focus people to help me get Bibles in Arabic in Egypt, probably the first basic thing I did for Muslims.

I was very excited about this, so I asked, “What do I have to do?”

I took the $5,000. The technical man, who was coming in from New York City, was not a Christian. I got there first with my staff person. I went right to the government and gave them the $5,000 because I was all ready for the satellite broadcast.

The technical man came the next day, and he said, “I want to talk to you about some things you need to be careful about. Don’t give the money to the government until you do the satellite broadcast because if you do, they will never do it. You can wave it all goodbye.”

He said, “How could you be so stupid?”

Some people are so direct.

He said, “Well, you can wave that goodbye. You will never do it.”

And I have found that He helps stupid people. I knew a few people on the American Embassy who were Christians. I had been there before, so I called them.

They said, “What are you doing here?”

I told them, “I am here to do a satellite broadcast.”

I said, “Well, I have already done it.

In two or three mouths we get that witness, right? You can take that and let it bury you and you can carry that wound, but if you give it to Jesus, He will give you something beautiful. He really will.

So I called another man. Harold Bredesen had led this man to Christ. He was on the Egyptian Parliament. Harold had said to me, “Please take a gift to him from me,” and so I had the New Testament on tape.

I called up the member of the Egyptian Parliament. “Could you come to the hotel and pick up this gift from Harold Bredesen?”

We had tea together.

He said, “What are you doing here?”

He said, “I am on the parliament. I want to say something, but it is very confidential. Don’t give the money to the government first.”

You know he would say that!

Now I have [heard this] three times!

She was the widow of the president of Egypt. He had been shot, I think, a year before.

He said, “She is my friend. Let me call her. Maybe she can help you.”

He called her, and she invited me for tea. I go for tea at this beautiful mansion on the Nile River. Here is this lovely, gracious lady, beautiful lady. We sat down and had tea. She even let me pray with her because she experienced the death of her husband the year before. Then she said, “Well, now, Marilyn, what are you doing here?”

So I told her.

She said, “Don’t give the government the money.” She said, ” I wouldn’t want to be quoted, but don’t do that.”

“Mrs. Sadat, I have already done it.”

She said, “Let me see if I can help you,” and she called.

Casting all your care

Embrace the journey instead of chasing the Perfect Life

Remember to whom you belong

And He loves me despite the fact I fail Him everyday

I loved you at your darkest