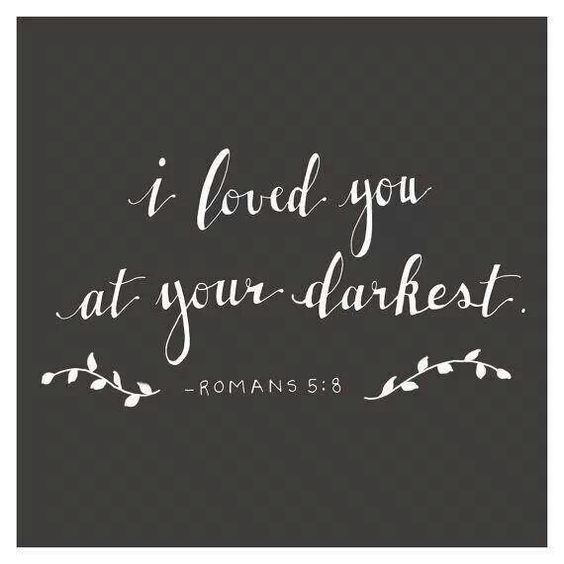 “I loved you at your darkest…” Of course, Romans 5:8 is set in contrast to Romans 5:7. In the general course of events of human interaction, rarely will humans like “righteous” people. Certainly, no one likes “self-righteous” people, but we tend to be uncomfortable around “righteous” people. These are the “too good to be true” people. They seem unapproachable. We do tend to like good people—people who are kind and compassionate. These are the people with foibles (so that we are able to identify with them), but they are comfortable to be around. But we take a certain dislike to “bad” people…people who are offensive, rude, spiteful, prone to mistreat us or take advantage of us, or outright physically confront us or threaten us with violence, or even death.

Now, we contrast that with many people’s relationship with God. If God is acknowledged at all, He either seen and distant, and therefore of negligible consequence. If He is considered to be of some consequence, there are those that actively despise Him, merely endure Him, or take an entirely utilitarian approach to Him as a sort of Santa-in-the-Sky, a rigged “one-armed bandit in the sky that ALWAYS pays off something, as long as we put in our contribution (tithe)…who is there to give us the “good” things that we request (according to our own sense of “good”). And we expect this, even though we are sinners who reject God in our daily lifves.. We, often with a habitual consistency in our lives, “miss the mark” (and the distance by which we “miss that mark” could rarely be defined as negligible: like beginning archer, we not only miss the bull’s eye, we miss the target altogether!)

So, to look again at Romans 5:8. God demonstrates (present tense, active, i.e. God continually is demonstrating) His love toward us through one blinding and almost indescribable act of love: Christ died for us! This act was so consequential, it had reverberations that extended into the distant past and throughout the future. Is it any wonder that at the death of Jesus Christ on the cross, the sun darkened, the earth quaked, and rocks split? Even the centurion, and those under his command who were guarding Jesus, remarked: “Truly, this was the Son of God!”. I am an Orthodox Christian (Eastern Orthodox) Christian, who was an Evangelical Christian prior to being chrismated in my current church. During my Evangelical days, I was enamored of the hymn “And Can it Be That I Should Gain?” (and I still like it). To give a “words and music” attribution, Charles Wesley (John Wesley’s brother) wrote the words to this great hymn of the faith, and Thomas Campbell wrote the music. In my hymnal, under the title, in small italic letters is a scriptural reference: Romans 5:8. Here is the first verse: “And can it be that I should gain and interest in the Savior’s blood? Died He for me, WHO CAUSED HIS PAIN: for me WHO HIM TO DEATH PURSUED? Amazing love! How CAN IT BE that thou, my God, shouldst die for me?” That is what Romans 5:8 means.

Embrace the journey instead of chasing the Perfect Life

God will carry you through the storm

I will carry, sustain and rescue you