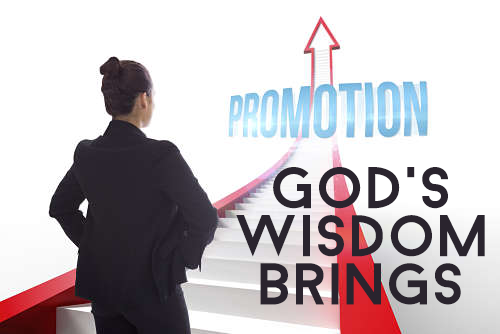 Then Pharaoh said to Joseph, “Inasmuch as God has shown you all this, there is no one as discerning and wise as you. You shall be over my house, and all my people shall be ruled according to your word; only in regard to the throne will I be greater than you.”
Genesis 41:39–40

When Potiphar saw that the Lord was with Joseph, and that everything he touched prospered, Potiphar immediately promoted Joseph and placed him in charge over all the affairs of his house (Genesis 39:3–4). Similarly, when Pharaoh saw that the Spirit of God was in Joseph and that there was none who was as wise and as discerning as Joseph, Pharaoh placed him in charge of the whole of Egypt (Genesis 41:38–41).

My friend, promotion and increase come from the Lord through His wisdom, presence and unmerited favor. It may feel like you are stuck in a hopeless situation, cast away and forgotten, but the story isn’t over yet. The Lord’s promotion is coming! So don’t give up. Don’t try to manipulate the situation either and get into strife. Continue to seek the Lord as your wisdom and thank Him for His presence in your life. Trust in His love and unmerited favor toward you and He will promote you in due time!

Don’t Look Around, Look Up!

The Holy Communion Brings Life In Your Darkest Hour

Mix of Meat and Bones

Salvation. Begin your steps to peace now by reading below.

Worship With The Psalms Of David And See Good Days

A Prayer for God’s Design By Matt Chandler